The core of the HDR47E brightness performances is an array of 2202 independently controlled high power white LEDs as back lighting system.

Each LED emission level is controlled, consistently with the image on the LCD panel and with the specific light spreading function of the optical layers, in order to give the most appropriate brightness contribution to the final image.

In a few words, less light will be emitted behind darker small portions of the screen while more light is emitted behind brighter ones. The LEDs activation pattern will look like a “low definition” version of the final image. 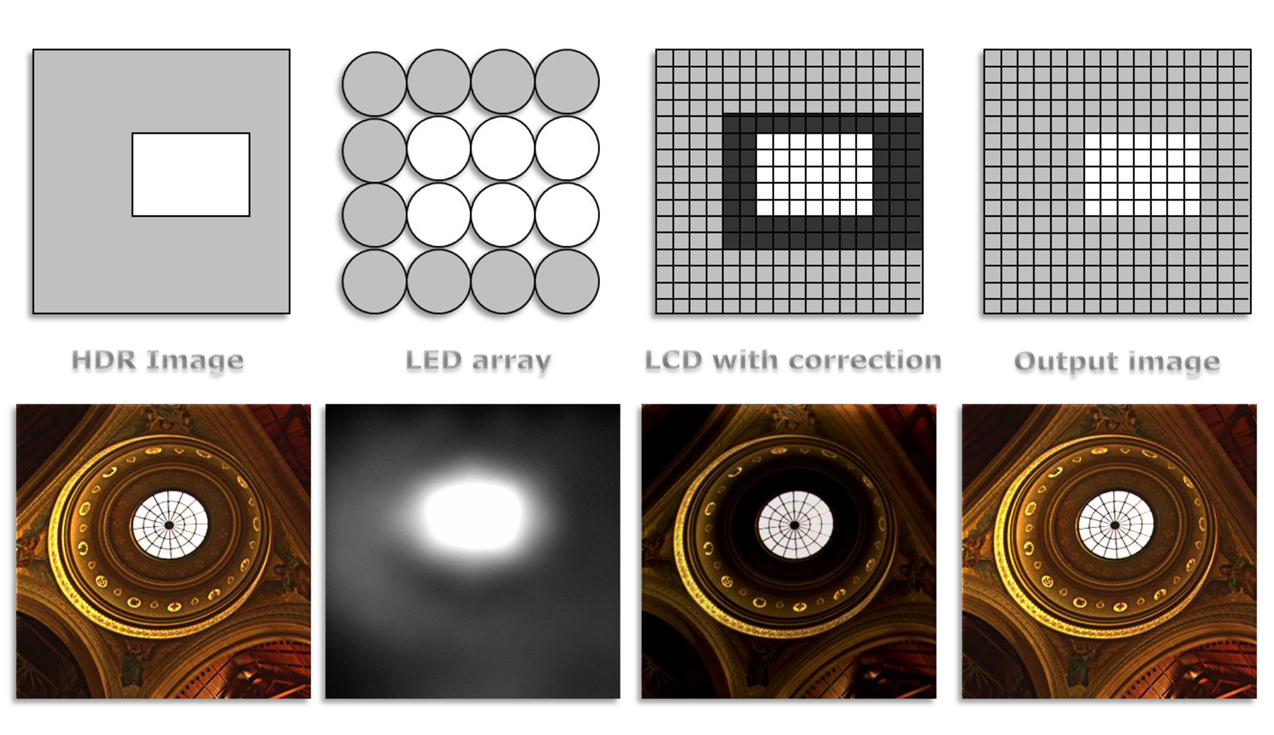 Such simple concept requires a pretty refined technical implementation, as light paths must be controlled with precision. SIM2 has a long tradition in complex light systems engineering for projectors which has been fully applied while designing the HDR47E series.

The method chosen by SIM2 in order to minimize the light leaking from one LED to its adjacent areas (shown in light blue and green in the schematics) and maximizing the contrast of the LED image is to introduce a reflector around each LED, which spatially restricts the light from one LED to within a specified area surrounding the LED.

An example of such LED reflector is illustrated by the simple 2-D schematic shown on the left.

The top shape of the reflector is very important because for avoiding dead areas at the top of the reflector, which would correspond to a dark shadow on the final image.

The very simple solution was a reflector with a hexagonal top shape, resulting in no dead areas at the top of the reflector array, as seen in the picture. This particular array configuration allows to obtain the thickest light sources distribution, which means a very high overall emission level and resolution.

Any reflector with a traditional round top shape, used in conjunction with hexagonally packed LEDs, would lead to dead areas with no exception.

On the other extremity, the bottom had to be shaped to fit the emission area of the LED in order to maximize reflectance. While LEDs features a more directional emission pattern compared to other light sources, this is not enough to reach the goal of high emission and suitable homogeneity within each LED emission area. The lower part of the reflector seamlessly integrate with each LED optics and makes good use of the peripheral light contributions redirecting them where required.

HDR47E monitors are equipped with high quality LEDs, which are individually selected and matched before assembly, taking into account both brightness and light spectrum emission. While being a time consuming activity, this is a further commitment to the production of a working tool aiming to be a reference for HDR technology development market.

The LCD layer is a professional grade TFT panel which has been selected for its reliability and resilience. It must be capable of managing a massive amount of radiations for long time without suffering from uncontrolled performance degradation or even failures.

A custom metal cage couples with extreme precision all the optical elements. Planarity and exact coupling tolerances are really important for getting the best possible uniformity and reliability.

The whole optical assembly is performed in a white room. White room, also known as clean room, is a room having a highly controlled atmosphere. It features a dedusted laminar airstream flowing vertically in downward direction. The air of our white room is also controlled in temperature, moisture content and composition.

Subscribe and get the latest updates, news, and more...